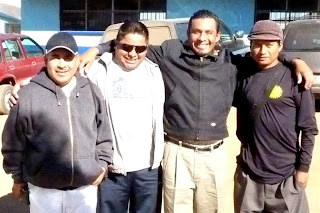 There are 4 very special guys who are part of the school outreach team. Three of the guys pictured enjoyed the outreaches into the school that were put on in Feb. 2010, that they asked if they could join in again. It was awesome to see one of the young men, Celso, going from super shy with the kids in Feb. to teaching with gusto this time around. What was even more special was when I queried him about his testimony. Celso had left his home in Vera Cruz at just 12 yrs old. His search for something better took him to Tijuana where he tried to find work. Because of his young age, nobody would hire him. He said he would stand outside of grocery stores where people would supply him with bits of food and he slept in a govt. run facility. A young man befriended him and took him under wing and led him into drug use. Celso followed him to the San Quintin Valley where he began working as a field hand. He heard about Jesus our Savior through a film ministry that Mexican Medical Ministries puts on at the work camps. Celso told me that for three years he tried to leave the drug lifestyle but just couldn't seem to separate himself from the hold this man had on him. Then he was invited to join a Bible school in San Quintin where he could live on the school site. Well this past summer he graduated from that Bible school and is looking to return to start up a mission near where he grew up. The most touching part of the story came when he told me about a recent visit he had made to his hometown. Celso had not had any contact with his family since he left over 12 years ago. Well, after his graduation he hitched a ride home where he made contact with his mother. She didn't recognize her little boy and told Celso that she had thought he was dead. The mother in me can't imagine the sorrow his mother had been suffering and the JOY that must have leaped from her heart. Pray the Lord's path for Celso will be made clear to him.
Posted by BajMission Blog at 5:47 PM