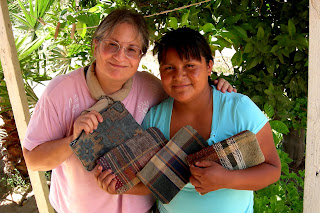 Meet Camelia the newest lady to start her own sewing business in San Vicente. Her first products are these zipper bags, just in time for the school year. (they make perfect pencil cases.) She has been attending my sewing classes for the last two years and decided it was time to launch her micro enterprise. I had to fight back the tears when I questioned Camelia about what she planned to do with her earnings. She answered, "I would like to be able to buy shoes for my daughter and be able to pack school lunches for my children. A successful business can make a HUGE impact for this family. Her husband is a farm worker and they have 4 children including a 3-month-old baby boy. They are in the proccess of purchasing a small piece of property not far from our little casita. There will be plenty of challenges as Camelia has never attended school. Pray that I have an abundance of grace, patience, and wisdom as we move forward together.
Posted by BajMission Blog at 10:58 PM No comments: 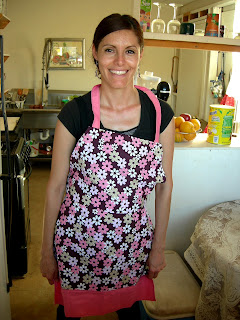 Showing love to the people of San Vicente is so easy with little things like, sewing this apron for our neighbor Karla who is running her own resturant. I just wanted to create something that would encourage her as she works long hours to provide for her four children.
This week I also gave away dozens of photos that we've taken during the last year of our friends in SV. Most people here have very few pictures of their families. So, I've been goaling to snap more pics just to give them away. There were lots of smiles when I handed out photos after church on Wed. night. :)   :)    :)    :)

Posted by BajMission Blog at 10:32 PM No comments: 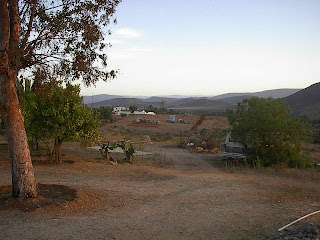 Hello all! Down in the ‘Village’, Lori working with her sewing women, me doing some health-care program set-up, AND… It’s hot. Desert-hot. 100-degrees-in-the-shade hot. The wind is hot. Sit-and-sweat hot. Low-humidity hot, which means you are dehydrated BEFORE you fell dehydrated. A couple of the nights, it cools down… last night, not! It’s a typical August here in San Vicente. It will get hotter into Sept and Oct, especially when the Santa Ana winds kick in. Those are ‘inverse’ winds that develop out of high-pressure weather systems that park over the ‘4 corners’ of the US. These result in winds of 40-60 knots from the EAST, with a humidity of 10-15%. Fire hazard goes way up. No wonder all the short-term outreachers don’t come in Aug-Oct… wimps… REAL missionaries brave the hard stuff… (excuse me, have to wipe the computer off, all the sweat writing this short bolg)
Posted by BajMission Blog at 12:29 PM No comments: 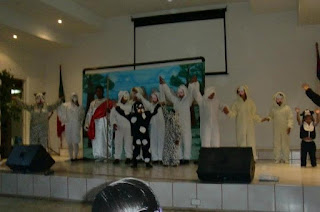 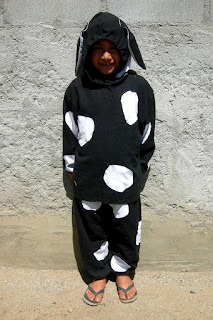 There are times when my sewing skills are stretched. Recently, a call came out to the memebers of the church in San Vicente to sponsor several of the children who would be participating in a play when the church went on its annual outreach. I voluntered to sew one of the animal costumes. Now that's without a pattern. Yikes! Lots of measuring and adjustments. So, it was a challenge. However, after I finished the outfit, others used it as an example to create their animals. You can see Daniel proudly modeling his costume and then performing in the play. Hope the church decides to do the skit again in San Vicente so that we can see it.
Posted by BajMission Blog at 4:21 PM No comments:

Celebramos, estilo Mexícano! Hey! Last Saturday night in San Vicente, the Village celebrated it’s 232 year anniversary in grand Mexican style! Yep, 232 yrs ago the first Catholic missionary arrived and set up camp, which became a Mission, which became the Village. The entire Village basically shut down to celebrate. The small ‘main street’ was lined with food vendors cooking many of the traditional celebrational dishes… we had champurrado (a wonderful corn meal-chocolate-milk beverage served piping hot) and some tacos de carne asada (with fresh-cut cactus!). Most of our friends went with the traditional ‘corn cob on a stick’, which was lathed in mayonase, chili sauce and butter. The local leaders brought down a young college dance troupe who presented a number of the traditional Mexican dances from the body of culture called ‘Balet Folklorico’ (Folk-loric ballet). Each region of Mexico has it’s own special traditional dances, with their own costumes and dresses, accompanied by that region’s music. Once you experience good Balet Folklorico, you know you have touched the heart of the wonderful Mexican people and their history. Lori and I enjoyed over 90 minutes of this amazing group from Tijuana, which included 5 full costume changes for the troupe of 24. They danced their hearts out in the public square in front of the police station. We walked around the town square and talked with many of friends in the Village while the ‘norteño’ music group blasted. ‘Norteño’ music is centered on an accordian, and reflects the influence of the German immigrants into Mexico in the early 1800’s… not my favorite, but it grows on you, since it’s the music of Baja Mexico. The music lasted well past midnight… !! Tu hermano, Cristobal 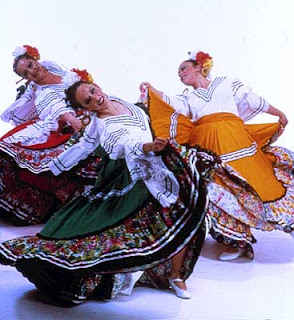 Posted by BajMission Blog at 6:28 PM No comments: