I have to tell you about an actual miracle that the LORD worked in San Vicente.
It's been a slow-grow miracle, that has taken quite a number of years to bring about.

Remember this picture: it's a picture of a miracle under way!

What's that miracle? It's churches and their peeps willing to 'cross borders' and fellowship together.

Background: when we arrived in Mexico as missionaries in 1991, we were shocked and 'not sure what to do' when we constantly encountered a severe 'no tresspassing' rule between Christian churches in Mexico.

I could tell you story after story we experienced in Juarez, Chihuahua, Baja California, Los Cabos, Oaxaca, Chiapas... painful stories when we witnessed kind-hearted members of one church who went to an activity at another church... and for 'cross-fellowshipping' with people from another church, they received a public castigation for going 'to another church for an activity'. These activities were as simple as special speakers or special music, a celebration, or an outreach to the community. In the community of Juarez we lived in for 6 months, there was an instance that a couple went to their friend's wedding at another church, and they were kicked out of their own church for having gone to that 'other church'.

We have experienced situations in 'our village' of San Vicente where youth from one church went to a special youth event at another ministry center, and had to withstand 20 minutes of being yelled at from the pulpit on a Sunday morning.

However, GOD is doing an incredible work. He is making the situation in San Vicente so that churches have had to begin trusting and interacting with each other.

The Bajmission ministry 'Star Seamstresses' is purposely INTER-denominational. We have Assemblies of God (AG) women, we have Nazarenes, we have Baptists, we have Pentecostals, we have Calvary Chapel people... you get the point. Lori had some difficulties in the early days, but now we are seeing positive interactions between Followers of Jesus in the Sewing ministry that has nothing to do with 'what church they belong to'.

Enter one of the Star Seamstress ladies, Elsa, who is the AG church 'women's ministry' leader. She felt the leading of the Lord to have a Woman's Event, and invite the women from other churches... including their female leadership and pastor's wives... to a time of worship, an 'inter-sharing' with skits and music, a special speaker, a time of prayer and a meal. The women of the AG church raised the $$ to do it, and the event would be free to the women of the surrounding churches.

Guess what happened? EIGHTY women came out, 55 of them from other churches. Mainly from the Nazarene and Baptist churches, they were together for almost 4 hours, and had a glorious time together. 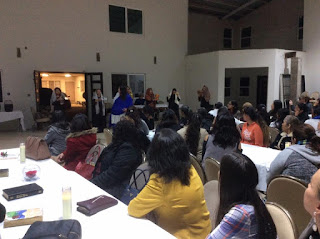 The pastoral leaders of women at these three churches, standing together, worshipping, praying for each other, sharing tortilla...

As Lori and I prayed for the event 'the day of', we were so drawn to the fact that, in Psalm 133, that it is the ONLY place in the Scriptures that says that God will COMMAND a blessing in the presence of demonstrated Unity within the larger, multi-congregational Church. 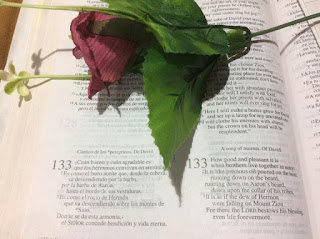 The gathering happened. The Miracle took place. The ladies we've talked to are super-jazzed at the PResence of the Lord in their gathered midst.

God is commanding blessing on the Church of San Vicente
After 28 years of Mexican ministry, I got to see a true miracle in a small farming village in Baja California, Mexico.

Posted by BajMission Blog at 7:25 PM