Long-term Missionaries...
With the surge of 'short-term' mission trips, long-term missionaries are a diminishing breed in Christian circles in the United States. In the churches of Baja Mexico, however, Christians tend to view missions as something that means a very, very long-term commitment.

In the small village of San Vicente, with barely 4500 people in the region, we've encountered a number of Mexican nationals who are passionate and energized towards long-term ministry and missions. As the Lord has brought us together, we've given special attention to these folks with encouragement, counsel and prayer towards long-term Christian service.
Lately, two particular couples have really 'pressed hard on the gas pedal', and are revving up for their next steps in Missions. We've been spending time talking and praying with them to clarify what the Lord is saying to them, what their role in missions might be, and helping to frame 'next-step' plans and actions. 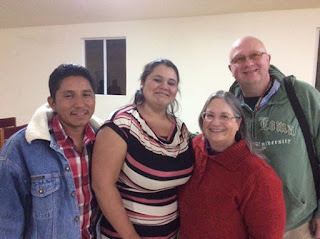 Jorge and Hilda, friends thru the Nazarene church in San Vicente are beginning to see some clarity in their call to re-build the people of a small Pentecostal church in Oaxaca, and outreach to the surrounding villages. We are currently connecting with pastors and leaders to help Jorge find a Bible school/seminary that he can fulfill the needed education to step into that role.

Dario and Anaid are an energetic couple associated with the San Vicente Assemblies of God. Dario is sifting through a call from the Lord to launch and maintain a much-needed 'half-way' house ministry to drug addicts and alcoholics in the region. Anaid has been a part of Lori's sewing-cottage-industry ministry, and this couple is beginning to identify the needed steps to build such a ministry in a sustainable fashion.

As we 'walk together' with these two couples, it really is exciting to listen to the 'God-stories' they have, and where the Lord is leading and directing. Their determination to serve the Lord, no matter what the difficulty, is inspiring.

Pray for us as we continue to walk with these couples, and others who are talking to us about the Call of the Lord in their lives!